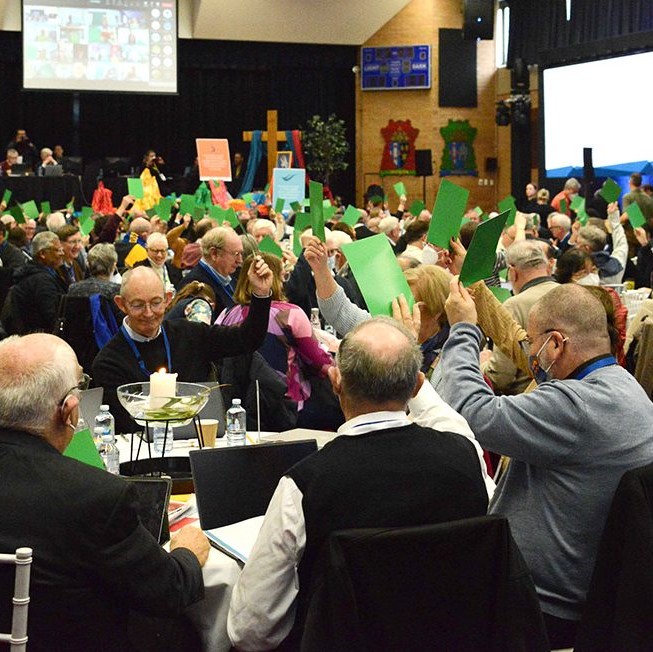 This week the Catholic Church in Australia is holding the Second and final Session of the Fifth Plenary Council. When we say glibly that this week concludes an historic event in the history of the Church, we do so because Fourth Plenary Council was held 80 years ago in 1937! This week is indeed truly momentous.

The Opening Mass was celebrated last Sunday evening appropriately in Mary McKillop Chapel in Sydney, praying for the future of the Catholic Church in Australia.

The Church has spent 4 years gathering our concerns about that future. It sifted out the most prominent themes from the 17,000 submissions during the First Assembly in October last year.  Now that final synthesis of 8 themes will be put into action by its 30 motions this week. The 277 delegates have voted each day on how we will make these changes so desperately needed in a wounded Church with dramatically falling numbers.

The 8 themes to be voted on are:

Then a very moving liturgy united the whole Assembly in grieving and asking forgiveness for the sins of the Church in relation to sexual abuse. The motions – about children, young people and vulnerable adults having been abused by clergy, religious and lay workers in the Church and that religious leaders failed to act sufficiently in response – were passed overwhelming. A good start to the week!

Tuesday 5th was a very different kind of day. There were motions  on the Mission Theme which affirmed that we need to move from our traditional pastoral ministry of mere conservation to a more missionary energy becoming a more listening Church with healthy and fruitful relationships between laity and clergy.

However while owning that there are deep wounds in those who are excluded in the church, there was reluctance to name amongst them those who identify as LGBTIQA+ and this caused pain.

Wednesday 6th The next Theme of Equal Dignity of Men and Women was even more contentious and fraught with division. With their deliberative vote, the Bishops voted down the motion on Equal Dignity of Men and Women in the Church with some commentators following the vote citing the motion itself as being worded too broadly. In response to the bishops’ vote, a number of the women members and some men rose and stood apart from the body of the Assembly in strong protest.  Many in the Assembly were visually upset at this motion being blocked.

Long deliberation and meetings followed. But to the credit of the Bishops and the flexibility of those planning the days,  some newly drafted motions on this topic will be presented again on Friday. Hopefully the result will be one that will be healing.

Thursday 7th Delegates returned to the task ‘strangely with a new sense of unity’, commented one delegate. Many commented on people with opposing views on the previous day’s contentious issues talking about differences. There was much discernment in the Holy Spirit and solidarity in action.

The Plenary Council members moved on together and passed motions around the next Theme of Church Governance centering on formation of Parish and Diocesan Pastoral Councils and synodality.  They voted to use as a guide the material developed in ‘The Light from the Southern Cross’ document.

On the Theme of Integral Ecology the Council voted that each Diocese and Parish undertake ecological education and the fostering of ecological spirituality through the study of Laudato Si’.

Two days remain at the time of writing this piece. Canon Law describes a Plenary  Council as a meeting of the churches. We who are still part of those ‘churches’ and who have clung on to the small hope that our voice would be heard in our 17,000 submissions from 2018 have a sense that perhaps this is really happening after all.