Parish Office Our Lady of the Rosary Catholic Parish

Peter Brannelly was raised on the Southside of Brisbane, the first born son of Kevin & Betty Brannelly, older brother of Jo-Anne, Louise and John. He was educated at the parish schools of St Joseph’s, Kangaroo Point, St Elizabeth’s, Ekibin and St Bernard’s Upper Mt Gravatt before going on to complete his primary and then secondary education at Clairvaux College.

After completing his senior year, Peter worked briefly in the bank before entering Pius XII Provincial Seminary at Banyo in 1981 to commence his studies for the priesthood. On 10 February, 1989 Peter was ordained a priest by Archbishop Francis Rush at St Bernard’s Church, Upper Mt Gravatt. Fr Peter’s first appointment was to St Edward the Confessor Parish, Daisy Hill as Assistant Priest followed by Our Lady of Lourdes at Sunnybank. On completion of his term at Sunnybank, Fr Peter was appointed Administrator of St Francis Xavier Parish at Goodna in 1994 and then Administrator in 1995 of St William’s Parish at Grovely.

With Archbishop Bathersby’s support and blessing, in 1995 Fr Peter volunteered to work in the mission Diocese of St John-Basseterre (Antigua) in the West Indies. For the next 11 years, he was pastor of the islands of Tortola, Virgin Gorda and the people of the British Virgin Islands. During this time the new church of St William’s in the capital of Road Town was built.

On his return to the Archdiocese in 2006, Fr Brannelly served briefly at Burleigh Heads before being appointed the foundation Parish Priest of the Jubilee Parish with the responsibility of completing the process of amalgamating the historic city fringe parishes of Ashgrove, Bardon, Herston, Newmarket, Red Hill and Rosalie. After 11 years at Jubilee, Archbishop Coleridge appointed Fr Brannelly as Dean of the Cathedral of St Stephen in July 2017. At the beginning of 2019, Fr Peter took up his appointment as the fourth Parish Priest of the Caloundra Parish.

I was born on 27 February 1981, to Kevin and Prue (deceased), and am the second eldest of four girls and three boys, growing up as a practicing Catholic family in New Zealand. Upon completion of secondary school, I enlisted in the NZ Army in 1999 where I gained a trade certificate as a Fitter/Turner/Welder. I served in the NZ Army for eight years including a 2005 tour of duty to the Bamyan Province in Afghanistan.

In 2006 I sought release from the Army and travelled to Perth, WA, where I gained employment in several Pilbara iron ore mining operations for the purpose of travelling the world. I subsequently travelled for 12 months, living and working in London, before returning to Perth and working in the mining industry once again; this is where my vocational journey began. In 2009 I woke one morning and decided (Holy Spirit), that I needed to be more involved in the lives of other people – earning the big bucks in the mines just wasn’t enough. So I up-skilled as a Personal Trainer and started my own PT business in Perth, specialising in weight loss and injury rehabilitation.

In 2011, after deciding that Perth was too far from home (Holy Spirit again), I shifted my PT business to the Gold Coast where I made, what I call, the first adult decision in my life: practicing my faith (Holy Spirit once again). In August of that year, while at a Saturday night Mass, I heard God calling me to discern the priesthood through the priest as he challenged the congregation in his homily: “Have you ever asked anyone to become a priest." This calling from God continued to strengthen and in Feb 2012, I was invited by the Archdiocesan Vocations Director to spend one year in Canali House, the Archdiocesan house of discernment, with other men who were discerning the same calling. During that year, I applied and was accepted to enter Holy Spirit Seminary, Banyo, which I did so on 10 February 2013.

During those formation years at the Seminary I completed a Bachelor of Theology as well as a Master of Theological Studies, focusing on Synodality in the Church. I experienced a selection of different Advent and Pastoral placements including the Cathedral of St Stephen, the Emmanuel Community, Burleigh Heads, Enoggera, Indooroopilly, and Clayfield parishes, and also completed my Pastoral Internship year at Stella Maris, Maroochydore in 2017 under the guidance of Fr Joe Duffy.
I was ordained a Deacon on 16 November 2018 by Bishop Robert McGuckin in the Chapel of the Holy Spirit, ACU Banyo whereupon Archbishop Mark appointed me to the Cathedral of St Stephen for the term of my diaconate.

Following my presbyteral ordination on 31 May 2019, Archbishop Mark reappointed me to the Cathedral for a short period of time before taking up a three-year appointment in the Caloundra Parish.

Fr Josh is currently leading the Evangelisation program in the Caloundra Catholic Parish. He is passionate about his faith, sharing his faith, and leading others to share their faith. He is a keen runner and windsurfer and hopes to one day run a sub-3hr marathon!

My name is Fr Dang Nguyen. I have recently been appointed by Archbishop Mark Coleridge to serve as an Associate Pastor at the Caloundra parish. I would like to take this opportunity to write few words to introduce myself.

I am originally from Vietnam. I was born and raised in the countryside. I am the middle child of five from a loving and devoted Catholic family. Both of my parents are farmers and my whole childhood was closely connected with rice and sugar cane farms.

My parents brought me up well and also instilled and nourished my faith. I still remember that my family often prayed the rosary together during the evening. To be honest, I once thought that was the worst thing that a parent can do to their child. However, looking back now, I believe that the experience gave me both a sense of faith and this kindled my love for the priesthood vocation.

It wasn’t, however, until 2008 that I came and joined the priesthood formation with the Augustinians in Sydney that my childhood dream became a reality. After ten years of religious formation, I was ordained on the 22nd September 2018 by Archbishop Mark Coleridge. I was then assigned as an Associate Pastor of St James Parish until mid of 2019 and then briefly at the Cathedral of St Stephen.

I am so thrilled that God has now brought me to be a part of the family of the Caloundra Parish! I am excited about sharing my journey of faith with you and look forward to meeting you all. 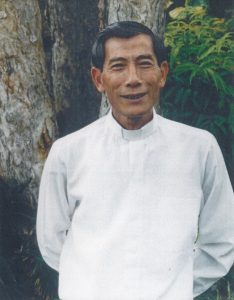 Fr Joseph was born on 23rd December 1949: Born in Qui Nhon, Vietnam; the youngest child of a 10 children family.
After finishing school, he joined the Provincial Seminary in Hue in 1969 and on 8th December 1976 he was ordained to the Diaconate for the Diocese of Qui Nhon. From 1976 until 1987 he was a Pastoral Minister at Sacred Heart Parish, Nam Binh.

In 1992, he was accepted into the Brisbane Archdiocese and from 1993 to 1995 he studied at Banyo Seminary, Brisbane.

He was appointed to Stafford Parish as Pastoral Minister in January 1995 and from 1996-1999 he was appointed Associate Pastor to Sacred Heart Parish, Booval. In June 1996, he graduated with a Bachelor of Theology at Brisbane College of Theology.

In 2017, Fr Joseph was appointed Associate Pastor of Our Lady of the Rosary Parish, Caloundra and Chaplain to Ozcare Currimundi Retirement Village.